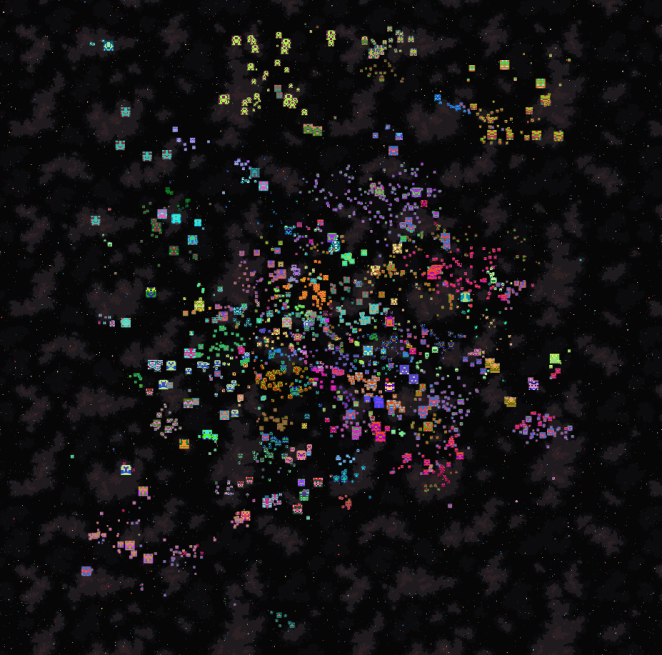 Blockchain technology is a breakthrough in that it enables the construction of permission-less and persistent systems that run independently of their creators. These are open systems on which anybody can build on top. We see that very clearly with DeFi protocols on Ethereum but as a game designer, games have always been the most obvious use case for it and from the day I stumble upon Ethereum, I was hooked on the idea of creating games that run and evolve independently of their creator. “Infinite Games”

I used to call these, “unstoppable games”, a term borrowed from Ethereum website back in 2015 which lured me into its ecosystem with sentences like “build unstoppable applications”. You can read about one of my earliest experiments with on-chain games here: Tug Of War.

This idea of permission-less and persistent games has been so appealing to me as a game designer: The ability to create virtual worlds that lives on their own is fascinating, to say the least.

A recent article by @l_udens from 0xParc on Autonomous world expand on the idea, check it out. It should come with no surprise that the creator of the first ever blockchain game (Hunter Coin) has his company named exactly that: Autonomous World. But while “autonomous world” is a great term, it somehow lacks a broader gaming component unless we restrict ourselves to simulation games. In some ways “Infinite Games” are autonomous worlds with meaning. In a game, players have most of the time something to do in that world, against or with other players.

While sadly, most current success stories in the blockchain gaming ecosystem have nothing to do with the possibility of unstoppable, autonomous worlds and infinite games, I am still very hopeful that if we retain something out of all the work put into the blockchain ecosystem (collaboration around EIPs via Ethereum Magicians forums, protocol design and more, see Vitalik’s blog and Ethereum Research forum to get a view of some the hard work and thoughts that have been put into blockchain ecosystem in general), is exactly that: the creation of systems, that lives with and for their communities, independent of any central authorities. And of course, such systems can be games / autonomous worlds / virtual realities. Note that interestingly we are not here talking about the usual 3d/VR component normally associated with virtual realities, but about the more fundamental level where rules have a meaning because they are immutable and interoperable. The “metaverse” if you see what I mean. See my recent presentation at EthCC on the subject and how the term “Metaverse”, coined first in “Snow Crash” resonate well with that idea.

On-chain Games are games where all the meaningful action of the game happens on-chain. Brian (@gubsheep) from 0xParc published a thoughtful article on that subject and it resonated with many. In particular, he makes us aware that if you want to look for true innovation in the blockchain space, the best is to look at the games that make use of the blockchain’s unique properties. Its “The Strongest Crypto Gaming Thesis” article focus on several properties:

These define on-chain games in a quite broad sense and we can recognize several games in the history of blockchain games that fit that schema, starting with Huntercoin where the whole blockchain is the game. and continuing with other title like “Tug Of War” mentioned above, but also Galeass and DAOG by Austin Griffith, Ethernal.world by Jia and myself, Dungeon Protocol by Killari, Dark Forest by Brian, conquest.eth by me, Mithrareum by Bohdan and many more in construction these days: Check out 0xCurio, Age of Eykar, Isaac and Realms (see their extensive doc).

It is worth pointing out that such games have their challenges and I invite you to read Sylve’s article on the subject here: “Four challenges in blockchain gaming”

Edward from the Decentralised Gaming Association would also add that decentralised games do not need to be on-chain in a traditional sense. See his articles on the subject here: https://edthomson.com/decentralized-gaming/

These properties are the same as that of the underlying programmable blockchain itself like Ethereum: it is programmable, permission-less, persistent and immutable. In other words “Infinite Games” are crypto-native on-chain games that preserve the properties of the underlying blockchain. They do not make any concessions. Players can come and go, build on top and be confident that their extensions live along. This allows any contribution to be more than mere source code.

By allowing this, Infinite Games become protocols themselves and worlds of their own. They also become an invitation to build. Indeed, such games allow extensions to be hyperstructures themselves.

Note that while I believe point 9. is crucial to allow the game to be truly infinite, there is probably scope to allow the game itself to introduce mechanisms to make the game evolve. These could be done through the game itself or via governance mechanisms. Having said that, ideally, any governance should be handled by a forking mechanism so anybody can decide. This is because governance through DAO opens up the possibility of undesired capture. Furthermore, game evolution can also happen by simply launching a new version of the game that could even borrow state from the previous.

Such infinite games are so fascinating because they replicate reality by implementing rules of physics (= rules that do not change). They are their own reality with a life of their own. @guiltygyoza has written an interesting article on the subject of on-chain physics that you should check out too : “Onchain Realities”.

This breakthrough was enabled by Bitcoin in the first place, which we can see as the first artificial life form. Its existence while still dependent on human activity, remains independent in its direction. This is because humans have incentives to continue maintaining the chain, at least for some time. In some ways, humans are like the cells of Bitcoin’s “body”.

Ethereum takes it further and allows whole applications to run on it. Ethereum makes blockchain an ecosystem for new life forms to evolve. Defi explores the idea with basic exchanges of value.

Infinite games bring it to another level by allowing the whole gaming universe to be designed and be let alive. This allows the creation of universes inside our universe that lives independently of us.

It is worth noting that achieving such independence while still being a meaningful experience for players is not that easy. Something of value must be at stake for players to participate. Otherwise, any player could create thousands of accounts and this would break any sense of fairness. In some ways, by giving games the ability to track this resource at risk through on-chain rules, they provide a new mechanism for game designers: The ability to ensure fair game at scale. We see that in action in conquest.eth where any player can join at any time. They can create thousands of accounts for themselves if they wish and the game mechanism handles it.

Conquest.eth is an Infinite Game that is running and alive today. Launched in April (at Defcon) it can be played by anyone here and we have seen the rise and fall of space empires during that time. We even saw the selling of whole empires. All of it is done in a permissionless world with no white-lists nor any time limit. The game will continue to live as long as the underlying chain remains (Gnosis Chain in that case).

It is fascinating to watch. While before the community could build source code and tools, that get re-used across different instances of a game (See Dark Forest community in particular), with conquest.eth and other infinite games, we can build hyperstructures (“Crypto protocols that can run for free and forever, without maintenance, interruption or intermediaries.”) on top of the game itself. The stuff being built inherit the lifeline of the game and so by extension the blockchain it lives on.

We are at the beginning of all of it though. Conquest has explored a minimal game design to explore better how the core idea works but we will be exploring more complex mechanisms in the coming year and can’t wait to see what players will be building on top. You can follow progress on conquest’s devlog

Note that the stuff to build does not even need to interoperate back into conquest’s smart contract. Systems that can only read conquest’s state can still provide a fascinating ecosystem to conquest’s player base and beyond. What if you build a game that reuses the state of conquest but adds its components on top?

What will you build?

If you have yourself the motivation to build new on-chain games, of the infinite variety even, I suggest as Will Robinson suggested several times, to have a look at board games in general as they share some of the same constraints. Check out his article. Interestingly, as Bohdan from Mithareum noticed in his tweet:

” Сurious fact that decentralized games were invented before centralized ones in the form of board games.

Even then, the moves were finalized by the consensus of the players, and endless patches and the direct influence of the developers were not needed to keep the game afloat ”

Another source of inspiration that I did not see mentioned before is a particular trend of games that bear strong similarities with on-chain games and to some extent, “infinite games” is the “Play By Mail” category, especially the one moderated by computer systems. See a list of games here. Designers of such games have indeed similar constraints to on-chain games. The cost of a turn for players in such games can even be a few dollars!

By the way, if you are a dev, designer, or community enthusiast interested in the possibility behind infinite games, let me know. I would love to chat. I have lots to build for conquest and would love some help :)

And you'll get updates on my new post regarding web3 and ethereum.